We are very lucky at Sung to have three instructors with almost 50 years combined experience in wing chun. There are no titles in the school, no bowing or requirement to flatter egos, respect is given and received on a mutual basis. Our job is to guide students, help them uncover their potential and to understand this fascinating art. We believe that through proper guidance every individual is capable of producing devastating, effortless power; we are here to help you achieve this. 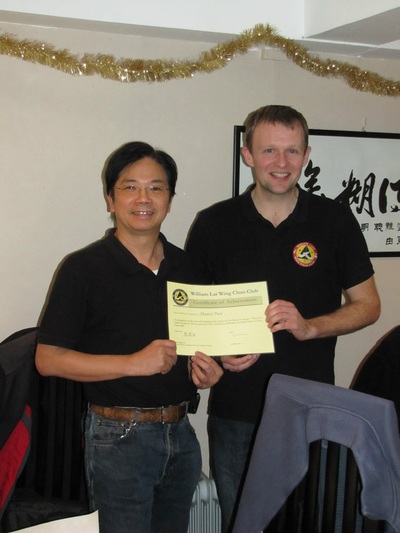 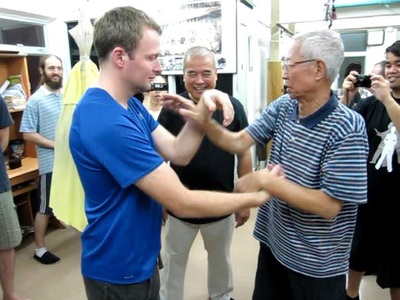 I have been training in Chinese martial arts for over 20 years, but started practicing wing chun in 2002 in the Chu Shong Tin style.
Initially I only planned to train for a handful of lessons in order to learn a few punching techniques which I thought would supplement the martial art I was already practicing. However, I was struck by the power, simplicity and effectiveness of the art demonstrated by my new teacher and his students, and thereafter I have trained wing chun exclusively.

In 2008, I was lucky enough to travel to Hong Kong and train at the home of Grand Master Chu Shong Tin, who had been my Sifu's teacher and the most senior wing chun practitioner in the world. This opened my eyes to the true nature of wing chun and the possibility of producing enormous power with little effort. That visit further inspired my training and thereafter I regularly returned to Hong Kong to learn from Chu Shong Tin and his senior students until he sadly passed away in 2014.

In 2012, I was formally recognised as a Sifu (instructor) by the Ving Tsun Athletic Association in Hong Kong, but I did not start openly teaching until 2014.  If was after this point I discovered how difficult it is the impart bodily knowledge with words and tactile manipulation and how ill equipped most martial artists are at doing this. Although Chu Shong had this skill, none of his students were in the same league of ability. In 2017 I started training to become a teacher of the Alexander Technique (AT). Despite AT not being a fighting art, it shares similarities with Chu method in how the use of the mind and body are utilised, with importance placed on muscular release in particular the spine.  Whilst training weekly at the Manchester Alexander Technique Training School  I have been lucky enough to learn from over AT 30 teachers, many with dozens of years of experience of body work, and this has transformed my impression of what Chu Shong Tin was able to do and how he approached his teaching.
I believe that to be a good wing chun teacher, you need not only to be good at wing chun, you need to understand what it is to be an education provider.  Both of these can be considered separate life long pursuits/vocations which require continuous work to improve on. 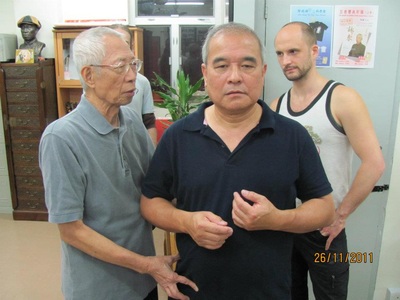 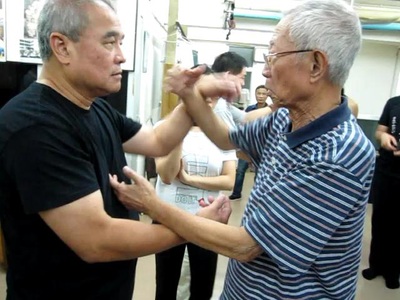 I began training in wing chun in 2005 as I was attracted to the softer approach of the Chu Shong Tin lineage, with its emphasis on relaxation and structure to develop power. I met Grand Master Chu Shong Tin for the first time when I travelled to Hong Kong to train at his school for a couple of weeks in 2007, during which I had the opportunity to begin a deeper study into his internal method of wing chun. Since then I have had the good fortune to spend many hours with him, not only in person during my subsequent visits to Hong Kong but also while reviewing video footage taken of him teaching at his kwoon in Hong Kong. The instructional video footage show Chu Shong Tin teaching form, principles and applications with his students in the manner of ‘closed door’ insights that are not generally available from his books, DVDs and public seminars. It is from this intensive encounter training directly with him in Hong Kong, supplemented by the insights from the instructional video footage, that I have come to an appreciation of the Chu Shong Tin method. The inner workings of the Chu Shong Tin method cannot be recorded in any medium - this information can only be received in the same way as it was in the past, through the means of hands-on guided transmission. I hope to be able to pass on what I have learned so that the legacy of Grand Master Chu Shong Tin is preserved in future generations. 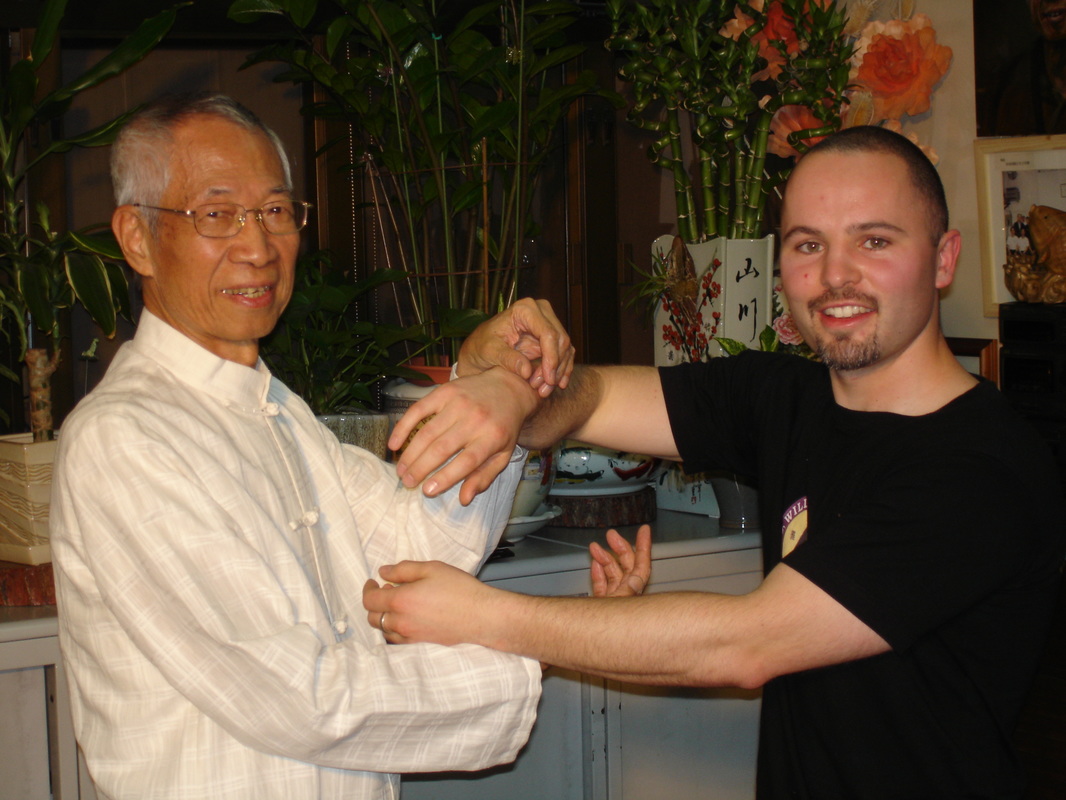 Chu Shong Tin and Jon Jones
Like many martial artists, I have practiced a number of different fighting systems. I started out with Kick Boxing, with the simple aim to learn how to kick and punch in order to ‘protect myself’. I moved on to Shotokan Karate, fascinated with the various forms (and even more so the hidden Dim Mak points!) but came to realise that my movement was stiff and slow – and that the younger, bigger opponents were doing better than I, despite my years of practice. A friend introduced me to Wing Chun, and I began to study a more fluid, and economical way to ‘fight’. However, it wasn’t until I started training in this lineage in in September 2004 that my eyes were opened to the idea of generating force through relaxation. Having previously relied upon my physical strength, it was a genuine revelation to meet and train with Grand Master Chu Shong Tin in 2007 – and to experience first-hand the devastating power he could generate through relaxation. I have since exclusively followed Grand Master Chu Shong Tin’s teachings – and want to share and pass on to others what I have been fortunate enough to have learnt so far. 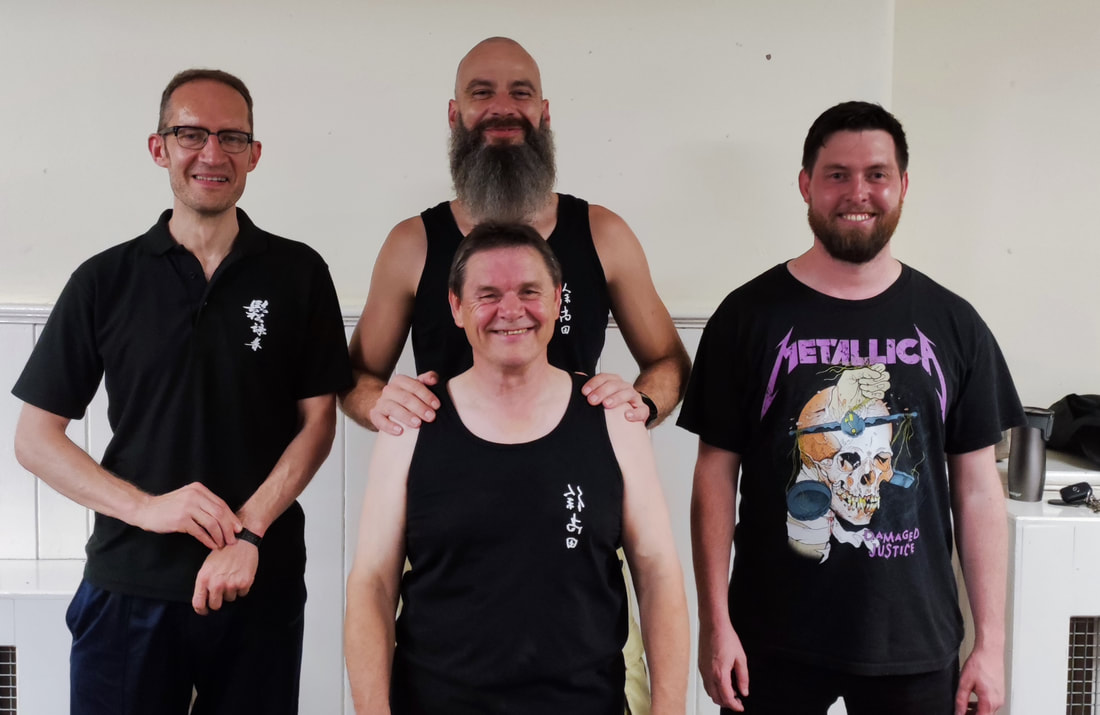 Jon Jones
I started my CST wing chun adventure in December 2015. I had previously tried a few martial arts over the years but nothing was ever what I was looking for. From the start I knew that Sung was different. With its unique blend of using the body’s internal structure to the lack of ego in your practice Sung brings a breadth and depth that other martial arts have never offered.
Over the years I have practised wing chun at Sung I have started to deepen the knowledge of how my body and mind work together effectively.


Craig Robertson
Having previously trained under an external lineage of Wing Chun I found that in a relatively short space of time, I’d formed bad movement habits that caused discomfort and pain during training. In my search to resolve this, I found videos of Chu Shong Tin and some of his senior students, which led me to join Sung Wing Chun in late 2015. The CST method instantly resonated with me, as it held the way that we move as a fundamental aspect of training. A  relaxed method of generating and dealing with force  has to be experienced, and the practices to achieve this spills over to much more than the Martial aspect of this art. Over the few years that I’ve been training I have not only resolved the previously mentioned issues, but fundamentally changed the way that I move and think about movement for the better. I can see that I’ve still a long way to go, but every step up the ladder is so interesting and enjoyable that I’m happy to be in it for the long haul. I feel lucky and grateful here at Sung, to have three excellent teachers in Mark, Dan and Jon, each with their unique approach to passing on their understanding and abilities of Chu Shong Tin Wing Chun.

Ziggi  (Zbigniew Wozniak)
I started my adventure with martial arts somehow as a teenager from Karate Kyokushin.  Unfortunately, I had to stop my training, but the thought of returning to active training accompanied me for many years.  When I was finally able to do it, I was no longer a teenager, or even in my twenties, but a mature experienced man who knew from experience that most martial arts do not have much application in real life.
So I started looking for something that is simple, effective and doesn't require the fitness level of a 20-year-old, and in the summer of 2017 I found my way to Sung Wing Chun.  The first sessions opened my eyes wide and made me love this art.  Everything was different from the martial arts I had encountered before.  Starting from the form of training itself, through the strength, knowledge and experience of the instructors, the relaxed atmosphere of training in which there is no unhealthy competition and practitioners help each other, to the effectiveness based on scientific foundations and the simplicity of the art itself.
Because CST Wing Chun is simple, but it is not easy.  And it will change your life.  It will give you confidence, change the way you think, move and even stand, and with time it will be present in your life every day.
It's been a few years since then and despite the knowledge and experience I have, I still have the impression that this is just the beginning of my path in this art.  So I will continue to follow it by sharing my knowledge, experience and trying to help others on their own journey.

Gavin
I'm a 5th year student at Sung.  I previously practiced Tae Kwon Do for 7 years, had two years off and in 2017 came across Sung Wing Chun. Seeing Chu Shong Tin on youtube I became intriged with wing chun.  It was even more exciting when I joined the club and felt what I saw on the videos.  There seems to be on age limit to this method of wing chun, its so subtle and explosive and just develops over time.  The three sifus and students are one happy family - come and train and enjoy this exciting style of martial arts!